Who is involved in the project?

Florida Sea Grant is funding an interdisciplinary team of University of Florida researchers to study potential impacts of future coastal change in Levy County, Florida, and to work with local leaders and citizens to identify possible strategies for adaptation

What is the timeline for the project?

The project runs from Spring 2012 to Fall 2013. During the Summer of 2012, project team members and University of Florida educators will contribute lessons on coastal changes and community planning at the City of Cedar Key’s Summer Youth Program. In the Fall of 2012 the public and interested community groups will be presented information on coastal change impacts to Levy County and provide input to project members. Project members and the public will work together with this information in Spring of 2013 to develop future scenarios and visions in response to potential coastal change. A regional workshop will be held in the Summer of 2013 to showcase lesson’s learned from the the project. The final outcome will be presented in Fall of 2013 to the public and local leaders, which will provide a toolbox for planning in rural coastal communities with an emphasis on planning to plan for future coastal change.

What are the expected outcomes of the project?

Partnership between the University of Florida research team, local leaders, and interested community members will help to identify current and future Big Bend assets and concerns. Areas of concern will be geospatially modeled to determine potential coastal change impacts. The impact analyses will receive input from local decision makers, businesses, and citizens. Additional civic engagement will come from  youth, artists, and community events such as festivals and public workshops.  Finally, a custom toolbox will be created to guide the community in adaptation strategies and encourage continued planning for coastal change.

What is coastal dynamics?

Coastal dynamics is the geomorphological change across a spectrum of coastal types including beaches and river deltas. Shorelines are continually changing due to natural and human causes. Change can occur from transport of beach sediment, silt accretion, sea level rise, and flooding. Catastrophic events such as tsunamis, hurricanes and storm surges accelerate beach erosion, potentially carrying away the entire sand loads.

Is there evidence of accelerating sea level rise in the Big Bend region?

Tide stations of the National Water Level Observation Network operating on all U.S. coasts, have been measuring sea level rise for over 150 years. Changes in Mean Sea Level (MSL), either a sea level rise or sea level fall, have been computed at 128 long-term water level stations using a minimum span of 30 years of observations at each location. These measurements have been averaged by month to remove the effect of higher frequency phenomena in order to compute an accurate linear sea level trend. The trend analysis has also been extended to a network of global tide stations. The measurements detailed below show that sea level is rising in Cedar Key, FL.

Why should we plan for future coastal change?

Some of the first observed impacts of coastal change may be flooding during storms and high tides,  greater salinity in coastal aquifers, and changes in shoreline marshes and forests.  Scientists have already documented the retreat of coastal forests for over thirty years in the marshes of Levy County. Scientists attribute the retreat to chronic stresses from increases in sea level and periodic intense storm events and droughts. The economies of coastal communities in the Big Bend are tied to numerous natural resources and natural amenities that may be impacted by future coastal change. Communities need to understand the issues that may develop with changing coastal dynamics and understand how to plan according so that people and ecosystems can adequately adapt. 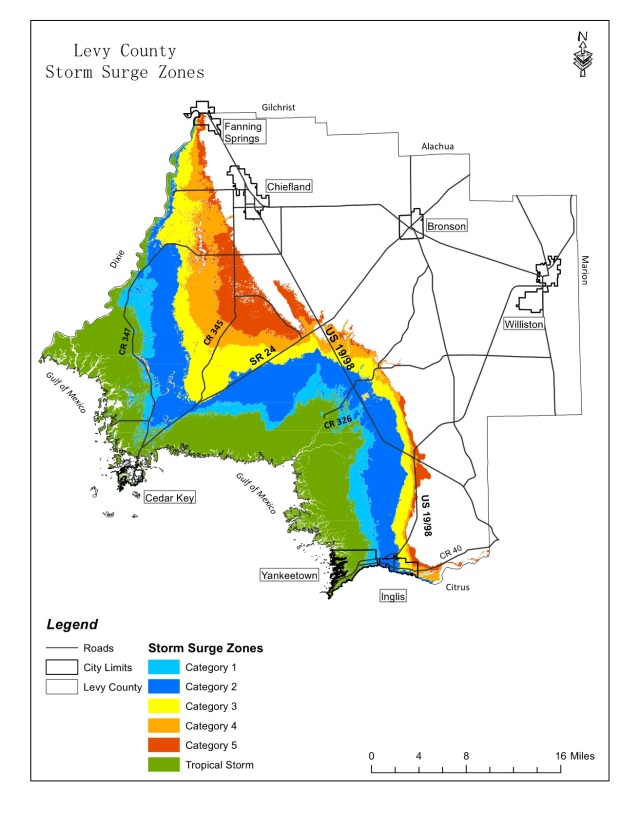 Hurricane storm surge zones extend far inland in Levy County. This means coastal areas are highly sensitive to changes in sea level and are vulnerable to flooding and frequent inundation. Communities need to plan accordingly for these major impacts to preserve economic investments and natural resources.

Why plan for rural areas?

Rural areas and communities are often overlooked, or are not actively engaged in the conversation, when planning for coastal change in Florida. However, rural areas, such as Levy County, have important social, cultural, economic, and ecological assets that are worthy of proactive planning for coastal change. Rural areas are an apparent nexus for interactions between social and ecological systems because of the connection between people and natural environment.

What will sea level be in the future?

Scientific models generally agree that sea level will continue to rise, and that it will happen faster. Past and future sea level rise is related to the Earth’s warming, which has been occurring since the last Ice Age. With warmer temperatures, two main factors contribute to observed and projected sea level rise. The first is thermal expansion: as ocean water warms, it expands. The second is from the contribution of land-based ice due to increased melting. The major store of water on land is found in glaciers and ice sheets. Global sea level has been projected to rise two to three feet or more by the end of the 21st century, but it will not climb at the same rate at every location. Differences in land movements, strength of ocean currents, water temperatures, and salinity can cause regional and local highs and lows in sea level.

How can we see what areas may be affected by future sea level rise?

This project will use a simple model called the “bathtub model .” The bathtub model essentially uses the ground elevation of an area to predict inundation. For example, if the model is using a scenario of three feet in sea level rise, it is assumed that anything along the coast that is less than three feet in elevation will be flooded. While this model does not take in to account the complexities of an area, such as erosion or existing protective structures that may effect the level of inundation, it does provide an estimate of the areas that may be impacted by changes in sea level. As the prominent statistician George Box said, “All models are wrong, but some are useful.”